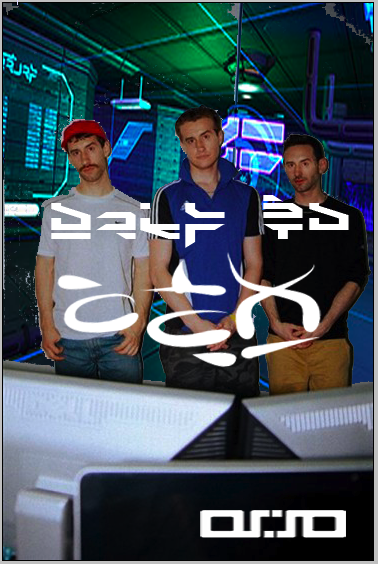 EXO just came out. Download-- it's FREE. A 35 minute game by Tabor Robak, set to the album of the same name by Gatekeeper. It's part of a dispersed visual project-- the album artwork, the game, and a font.

Robak says (quoting from this feature):

“Everybody’s making music videos, so it’s time to figure out what the next thing is [...] I think novelty in general is a universally good force that should always be pursued. Newness [...] There’s a real saturation of [audiovisual] work. This idea was a way to set ourselves outside of that a little, with a new thing that didn’t already have a set of established ways to judge it.”

It also continues, maybe unknowingly but still more directly and self-consciously, a notgames DIY-realism trend exemplified by thechineseroom's Dear Esther and Tale of Tales' many games, with their preference for detail in content over that which emerges from mechanical variety or process-intensity. And the broader tradition of Hollywood and the AAA games industry, who we inherited these values from (teal & orange).

Not surprisingly, some things in Exo are unique and exciting, others not so much. 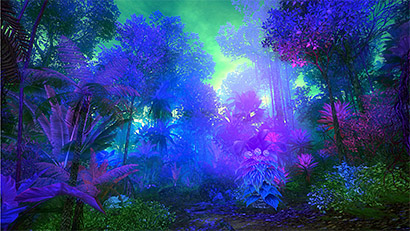 “It’s definitely a response to the popularity of lo-fi five years ago and also the proliferation of affordable high-definition technology,” says Robak. “Everybody’s got high-definition TV. The basic MacBook now is a pretty good computer [...] What HD means to me [laughs] is a commitment to quality and a level of detail.”

To produce some of this detail, Gatekeeper have revealed that they used Hollywood sound effect libraries for the album, those meticulously designed sounds that fill the whole frequency spectrum so elegantly-- these sounds that used to be the exlusive property of money, and now they're READY-MADE. Robak, likewise, says he uses texture/object packs to skin his virtual environments (Rhizome profile). In the culture of games, we're made to believe that a visual spectacle of this sort requires heroic bunches of money and man-hours. Exo asks-- why not just sample and process, reuse? 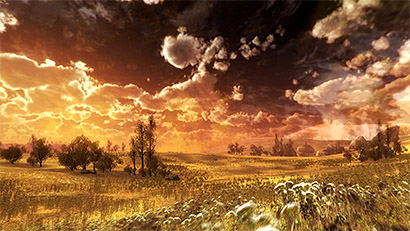 Robak has directed music videos in the past, and the rhythm of movies seems to have had an awkward but not totally negative impact on Exo's qualities as a playform. It's an "exploration" game, but one in which we're automatically "cut" from space to space every minute or so, like in a strange dream or travel documentary, no sense of connectedness between the environments.

As a viewer, we're kept engaged for the most part. As a player-- no longer any sense of agency in the spaces aside from the forever-moment of motion itself, moving and looking. This is the most recent of what Baiyon calls a "just walking game". And once we accept the value-space of these minimal mechanics, we move on and into them.

At this point the game becomes like a dance. Once we get used to the strange rhythm, the arbitrary force of transportation becomes like a partner for us and we're freed to experience time as time, space-as-time now limited from the top-down. That is to say, the sense of discovery in an environment is a kind of temporal installation of event-signposts and a way in which we recognize space's temporal dimensions. In EXO we more or less hand over control of discovery to Robak.

There is strangely a greater sense freedom here compared to, say, Dear Esther, which is set in a large connected space, but which also limits spatial movement with the comparatively manipulative device of the path (explicit and implicit, we're told what to do rather than just being given variable control in a constrained space). Gone is the possibility of discovery-in-space, and so, again-- discovery happens in time. This is like the experience of playing music: every key press and movement of the camera must feel meaningful, the motion itself, or we'll quit. 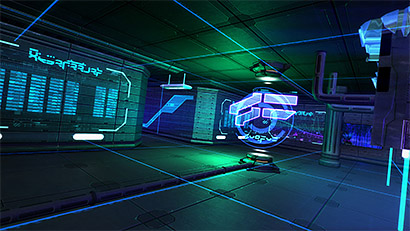 Now, the play grew tiring for me about 15 minutes in. The music is exciting, but its intensity is overbearing when sustained for so long in an environment that doesn't listen too closely. The tension between music and play is interesting for a while, but it ultimately falls into a pattern of predictability and unresponsiveness. We're no longer dancing with but at.

This is related to another experience I've had with Gatekeeper. There seems to be a nasty trend in parts of culture, particularly in fashionable clubs-- dancing AT the spectacle on the stage, everyone facing the same direction, and not moving too much, lest they knock into someone or look improper. This is what it was like when I saw them live a few months ago. It's a disappointing way to listen to dance music, which asks our bodies to become one with the space, sounds, and with each other. We're confronted with images and we've been conditioned by them to look forward and submit-- even when we're in music, which is all around us.

In Exo, what starts as an interesting tension between the fluid and the fixed, play and cut, becomes tiresome once we've gotten used to its repetitions. If the rhythm of the cuts was more variable, maybe this would have felt different, or maybe even if the static music track itself changed more.. admittedly, there's a redemptive climax at the end during the final track, a quick splashy recapitulation of all the spatial motifs, transformed, melting now. But... 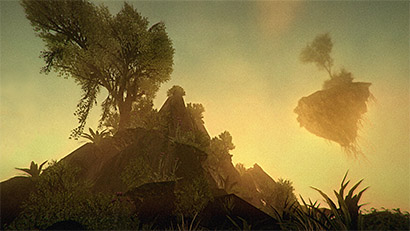 Variation, change, dissolve-- these things are missing in the structure of the playspace for the most part. Structural elements: transition-forms, speeds, object properties: our own variables, assets, must be given over to the same process of flow and re-use to which Robak and Gatekeeper have subjected the ready-made assets of the cultural commons in their sampling. A psychedelic realism, of process and change, hinted at in some of the moods here, must replace the object-obsession of capitalist realism/psych-corporatism that we're given instead.

One direction >> For a just-walking game: WALKING SPEED is the fundamental variable source of emergent rhythm, along with look-speed. It determines how quickly objects move on the screen-- as they grow from small to large and move past us, a visual pulse is established. Walking speeds change in EXO, and occasionally they feel right, but they tend to be too slow, working neither with nor against the rhythm of the music, but again-- at it. // 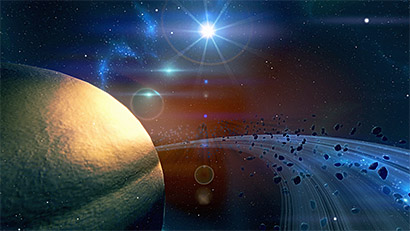 And finally, Exo as music game:

The soundtrack's implementation is static, suffering from the same alienated attitude to the relationship between music and play that we've come to expect in so many of these pop-game projects, like Pitchfork/Killscreen's recent INTEL Soundplay stuff, that assume a fixed soundtrack is enough. The guiding question here: games function like music videos? As a simple answer to this question, Exo works. It's the dance idea-- we can dance even to music that doesn't bend to our wills, right? True to a certain degree, and in many ways I enjoyed the direction of freedom in the game more than I did the live performance (and both as dances).. but something is lacking...

In successful engaged-performance, musicians have always responded to the energy of the dancers-- there is a feedback relationship here, as there is between musicians playing with one another. Feedback is a structural necessity in meaningful music-making. In fixed media, like a music video, the feedback relationships have been frozen, contained to static values in the forms themselves, and they leave us no affordances to further engage them (though they're playback mechanisms do so). The production of such forms involves feedback between audio and visual information, moderated by our own desires, and this is something we've become pretty good at.

In open forms, where dynamic variables are in play, to neglect to allow the sounds to take part in that variability (which we've already become pretty good at doing with visuals) is a mistake, and a common one. As a tension, it can be powerful, but there must be a release-- an expansion to counter the contraction-- if there's going to be any movement toward the space of harmonies of change.

Automated musical change is possible here, and it will be useful. Sounds tied to spaces and events and processes, allowing us to engage in play once again with our music. The process isn't too difficult, in fact just a continuation of that bricolage and coding work that's already been started, now using variables to control musical parameters in real-time. It wouldn't be difficult to cut the album tracks into loops and event sounds, 303s and beats and hollywood sound effects, game events triggering playback, volumes changing, maybe pitches, too.  Already-- a whole new world of possibilities, and we're only beginning. The spaces themselves will need to be musical of course, and the music spatial, liquefying those distinctions-- but this isn't an impossible challenge by any means, and both the spaces and music of Robak/Gatekeeper are already inclined in these directions.

This edit of Exo (sounds only) is an example of how samples from the album could be repurposed for use in a highly dynamic playspace. It was made with only three processes: cutting samples (changing start and end times), pitch-shifting them, and rearranging them in a layered, multi-channel space. 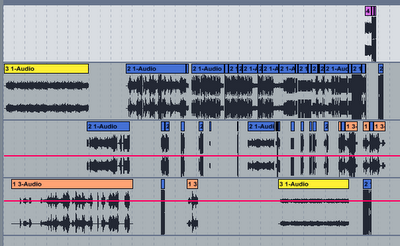 We can imagine that each chunk of audio in the picture (which is the pre-mixdown arrangement layout of the soundcloud track above) is triggered by a game event, either in play or automated, and that this particular sequence was only one of many possible realizations. Deciding how the start positions and pitch-shiftings could be determined by game events would be an interesting space to work in. And this is without manipulating volume, even, or having access to component objects, like solo 303s or sfx or hihats. There are a lot of possibilitites. This example is a very simple design of what things could be like.

Hi-fi is the new lo-fi, and this is a gift to the commons-- the continuing project of opening ourselves to everything as a material... a gift-- so long as it doesn't stay put. Fashions come and go-- this sound as a "now" thing will be gone soon, but the trajectory along which it's a point will stay in motion.

The sooner we get to the point of seeing/hearing things for what they are rather than what they're trying to be-- the better. All sounds as the space we're playing in. All images and structures, too.

Exo brings us face to face with tensions that have the potential to lead us in this direction. Keep moving. When we can play Dear Esther and see that it's greatest charms are in its imperfections, an uncanny-realism with proudly-virtual spinning sprites-- then we've begun to arrive at the right place, an awareness of the actuality of form.

When HD has become easy, ready-made, how does professionalization defend itself against the amateurs, bricoleurs? It can't-- ultimately, this is the project of the dissolve of the object and static values, becoming an infinite space of pure possibility and motion for us all. Again-- as long as we stay in motion. 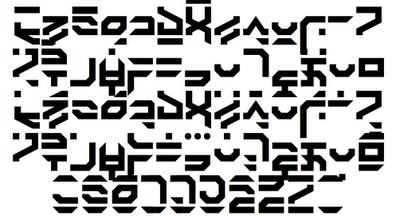 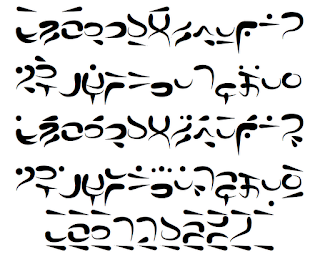 Posted by David Kanaga at 4:26 PM No comments: